News Ticker
It’s been the best part of a month since I last attended a Blues game but like many others I suspect, I have been keeping an eye on their progress if that isn’t too much of an oxymoron. The festive season, work commitments, midweek games that I had no chance of getting to or in the case of the Luton match, no chance of a ticket with their small ground, small allocation and high demand from other season ticket holders further up the queue than me were the reasons I hadn’t been a feature at games involving Birmingham City of late. I did however endure the performances against Leeds which was heartbreaking, Wigan which was abject and as for QPR, well words fail me!
Draws at Blackburn and Huddersfield were better than nothing and the Cup win against Blackburn was fortunate but I’ll take it. We remain in mid table mediocrity which is what I expected and we have been true to type in all honesty. My brother, Trevor has always said that teams that don’t win anything are those that fail to beat the teams they should beat and Blues have always been that type of team (e.g. QPR and Wigan at home!) However, at least our fanbase is realistic. Unlike our brethren across the expressway, at least we know we’re crap and have no pretensions of being otherwise.
It’s been an interesting week having finally found that we are drawn away from home in the fourth round of the Cup against neighbours, Coventry at St Andrews! I have obtained tickets for that game next week in the Gil Merrick stand but I’ll wager the away support will outnumber the home fans on this occasion. Potentially, it has the makings of a cracking match in a lively atmosphere which is what the Cup should be all about. Then of course, there is all the froth of the January transfer window. Quite frankly the whole thing is a load of twaddle and as far as Blues are concerned, until an individual player is holding a shirt or scarf aloft in the Tilton terraces, it ain’t happening. We all know the type of players we need and it all boils down to availability and affordability and therein lies the rub doesn’t it?
Enough of that, on to the here and now; Cardiff away, I mean home 😀 ! It was a freezing cold day, still air, bright blue sky and crisp underfoot and after a bracing early walk with my neighbour’s Cairn Terrier, Bentley, it was soon time to make for Blackwater station and the well trodden journey to Coventry via Reading. Chris picked me up just before 12.30 and there was time for a pint in his pub at Baginton before setting off to St Andrews.
We made good time and arrived at the George just after 14.00. We downed a pint there, saw the end of the Watford Spurs game and then made our way into the ground for a hot pork bap with sage and onion stuffing and apple sauce.
We made our way to our seats and just as we got there we were give some flyer leaflets which were to be waved in the direction of the directors box in the fourth minute. The Chinese writing apparently says step down and the significance of the fourth minute is that it is considered unlucky in Chinese culture. There was one flaw in the plan. Blues were awarded a corner over on the main stand side at the Gil Merrick end which was taken along the floor by Dan Crowley to the near post where it was flicked on by Jeremie Bela where Jude Bellingham was on hand to divert the ball into the net for 1-0. This was in the fourth minute and so the protest fell a little flat and by the time those that had remembered pick up their flyers, the moment had passed; not so unlucky after all it seems! 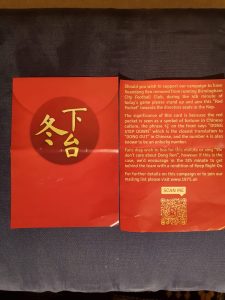 Blues were all over Cardiff in the first half an hour of the game and the Cardiff rearguard was struggling to cope with the speed and movement of Crowley, Bellingham and Bela aided by Colin and Pedersen foraging as overlapping wide men down the flanks. Sunjic was breaking up play and kept the home side on the front foot. Jutkiewicz and Mrabti were causing the Cardiff defence problems and a second goal was looking likely.
Sunjic provided a chance for Bela when he headed the ball to the Frenchman 20 yards out. Bela struck a lovely volley goalwards beating Smithies all ends up only for the effort to crash off the bar and over for a goal kick. Just after, Crowley’s goal bound shot was diverted for a corner. Another cross to Jutkiewicz was flicked on off the big man’s head to Bellingham at the far post. The sixteen year old must have thought his fifth goal of the season had arrived only for a brilliant flying save by Alex Smithies at the expense of another corner.
Although Cardiff started to come back into the game, they didn’t land a glove on the home side and as the half time whistle went, it was Birmingham’s half and Cardiff went into the break relieved it was only 1-0.
Regular followers of the boys in blue will know exactly what I’m going to say; Cardiff came out a different team after the break and were in the ascendancy from the off.  The change was so stark that you could argue that it gave the half time ‘Pep’ talk a whole new meaning! (I’m grateful to my mate Tim for that one! 😀 ) Blues were forced back and were struggling to clear their lines as they came under pressure. Cardiff pushed up 10-15 yards up the pitch, increased the tempo, quickened the passing and ran the channels getting in behind our back four and between the lines.
Blues were giving away silly free kicks and corners and invited pressure by engaging in head tennis with their opponents instead of relying on the slick passing football that had impressed so much in the first half an hour. It came as no surprise when Lee Tomlin deservedly equalised for the visitors just after the hour. A simple corner by Marlon Pack from the Kop side into the near post to Tomlin who got the wrong side of Sunjic allowed a header from two yards to nullify Blues lead.
Pep Clotet did attempt to change things back in Blues favour by replacing the ineffective Mrabti with Jacques Maghoma but Blues continued to look second best and nearly fell behind on 71 minutes when Lee Tomlin’s 20 yard drive just shaved Lee Camp’s right hand post. I am bound to say, I thought it was in when he hit it! Gary Gardner was also introduced for the tiring Bellingham and was lucky not to take an immediate early bath for a shocking tackle on Gavin Whyte for which he received a yellow card. However, the same could be said of a horror tackle on Bela by Jazz Richards earlier in the half; both these assaults could and probably should have been sanctioned with red rather than yellow cards.
In the end Blues defended stubbornly to hold out for a draw from a game which in truth they should have won in the first half. Near the end Blues perversely nearly snatched the winner when following a rare flowing move, Sunjic curled in an excellent cross for Lukas Jutkiewicz whose trademark header was turned onto the post by Smithies. Lee Camp also saved from Paterson’s shot with a minute or so left and a draw it was at the final whistle. Over the whole game it was fair; Blues were the better in the first half, Cardiff the second.
The Good: The football Blues played in the first half. The pork baps at the Cookhouse
The Bad: The second half; we continually allow teams back into games they should be out of.
The Ugly: The tackles by Gary Gardner for Blues and Jazz Richards for Cardiff. It wasn’t a dirty game but these two were absolute shockers and both players should have been dismissed in my opinion.
Birmingham City: Lee Camp 6, Maxime Colin 6, Jake Clarke-Salter 7, Marc Roberts 8, Krystian Pedersen 7, Dan Crowley 7, Jeremie Bela 7, Ivan Sunjic 7, Jude Bellingham 7 (Gary Gardner 80, N/A) Lukas Jutkiewicz 6, Kerim Mrabti 6 (Jacques Maghoma 64, 6)
Subs not used: Connal Trueman, Jefferson Montero, Josh McEachran, Alvaro Gimenez,David Davis.
Goals: Bellingham 4.
Yellow cards: Gardner 83.
Cardiff City: Alex Smithies 8, Joe Bennett 6, Sean Morrison 7, Leandro Bacuna 6, Marlon Pack 7, Curtis Nelson 6, Lee Tomlin 8 (Robert Glatzel 90 + 1, N/A) Gavin Whyte 7, Jazz Richards 7, Danny Ward 6 (Callum Paterson 32, 6) David Junior Hoilett 7 (Joe Ralls 83, N/A)
Subs not used: Neil Etheridge, Aden Flint, Will Vaulks, Josh Murphy.
Goals: Tomlin 63.
Yellow cards: Tomlin 61, Richards 68, Pack 74.

Referee: Andy Davies 6; I thought the officials had a reasonably solid game. Mr Davies was lenient in his view of the aforementioned tackles by Gary Gardner and Jazz Richards but you could argue that the Cardiff player committed his offence much earlier in the game and with over 20 left this could have influenced the result if he had red carded the player. However, he was consistent which is all anyone can ask. Lee Tomlin blatantly dived looking for a penalty just before he scored. He wasn’t booked despite the referee dismissing the appeal. However, overall the referee was fair, consistent and kept out of the way.

Don’t you just hate this time of year!