The glorious summer is to continue for a while it seems. After another stifling night, I awoke early as usual and went downstairs and put the kettle on. Whilst waiting for it to boil I decided to put some money on the new Fastpay card that Blues have issued us with which doubles as the season ticket. I signed up and attempted to load the account with funds but after four attempts with two different cards the error messages kept appearing and so frustrated, I gave up and made coffee instead. I decided to nip down to the station to get train tickets for Jonny and me to avoid queues. I’m glad I did given that only one machine was working. Jonny had prepared a Mediterranean breakfast of poached eggs on a bed of avocado, baby tomatoes and spring onions on lightly toasted bread (he is a very accomplished cook and has worked in a pro kitchen in past times). It was as delicious as it looked and washed down with more coffee it touched the spot as we sat outside in the garden.

It was soon time to set off for the train which was on time although the connection at Reading was delayed. However, we reached New Street about quarter past one giving us plenty of time to stroll down to the ground and grab a pint in the Old Crown by way of a change. Chris wasn’t able to make the game as he was catering for a big wedding breakfast of 150 guests in the middle of a field and sometimes commerce has to take precedence. Chris had roped little Jack in to help out and earn a shekel or two in the process so the usual tribe consisted of yours truly only. Will and his family were sunning themselves in France so all the season tickets were mine. My other son Ben would have joined us but he dislocated his kneecap for the second time a few weeks ago and is still recovering so understandably he decided to sit this one out. 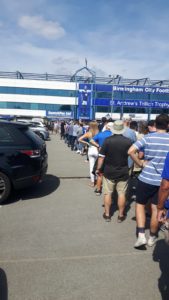 When we got to the ground, we were greeted by a queue to get in of the like you would not believe. That was regardless as to whether you had a season ticket or not but I feel sorry for those who had left it late and decided to turn up on the day. I have no idea what happened in the first five minutes of the game, so long did it take to get in but it was 0-0 as it was at half time. We did see Trueman make a good save from a header from Jordan Rhodes from a right wing cross by Ben Marshall early doors but apart from that and a shot from the right from Jacques Maghoma on 21 minutes after good work from Maxime Colin and another opportunity from a square ball across the box from Che Adams which Jutkiewitz reached only to fizz the effort wide when he really should have scored, not a lot happened . Blues were clearly playing a counter attacking game and the visitors therefore had plenty of the ball (over 70% in fact!) but frankly they did little with it and most of their possession was confined to their final third. It made for a dull and forgettable first period but the sun was shining and the crowd was in a buoyant mood.

Jonny and I set off just before the whistle to get in the queue for a drink but to no avail. The usual clueless standard of service prevailed and most people including us gave up in favour of the game. In contrast to the first half, the second was a cracker. Blues were far more offensive and on the front foot a bit more which made for a better spectacle. Blues came very close to taking the lead on 55 minutes when Gardner chipped a ball into Che Adams in the box. The young striker chested it down but was crowded out by surrounding visiting defenders. The ball fell to Jota but he could get enough purchase on his shot and Norwich managed to scramble it away. However, Blues deservedly took the lead a minute later when from the resulting corner from the left; the ball was only partially cleared to Jacques Maghoma who volleyed goalwards first time only to be blocked. He accepted the rebound first time crashing the second shot off the crossbar past the helpless Tim Krul. Blues were in control but some deft substitutions by the Canaries manager, Daniel Farke, changed the emphasis of the game.

One of the replacements, Kenny McClean almost made an immediate difference when put through down the right. Blues had Kristian Pedersen to thank for blocking his shot. Norwich continued to press and the signs were becoming worrying as the clock ticked down. Ben Marshall shot wide when well-placed and although Blues still created the odd chance such as Che Adams’ shot that was blocked by Hanley, the visitors were definitely in the ascendency. Gary Monk attempted to close out the match by sending on Cheikh N’Doye. Connal Trueman saved a point blank header from Jordan Rhodes which was a massive let off with about ten minutes left but Norwich deservedly equalised on 83 minutes. Norwich were making speedy incursions down the flanks and the Blues rearguard was getting pulled about. Onel Hernandez got in from one such incursion when Pedersen got caught ball watching and his curling shot from just inside the area was partially blocked by Truemen but the ball rolled in nevertheless and no one could deny that it hadn’t been coming.

The same player should by rights have given his side the lead immediately after when from a similar position, he missed the far post by a whisker. Blues were living dangerously at this point and I said to Jonny at the time; “OK it’s disappointing but don’t lose the game if you can’t win it.” It was at that moment that the ball broke to substitute Viv Soloman-Otabor from an excellent pass by Jutkiewitz. The youngster advanced towards goal and slotted past Krul from eight yards to send a packed St Andrews into raptures on 89 minutes. Bloody hell, were we actually going to win? Sadly not, a slip by one of our defenders on four minutes of time added on from a pass from Dennis Srbeny put Hernandez in the clear down the left this time and he made no mistake in slotting the ball past Trueman for a heart breaking equaliser. Blues still had enough time to snatch the lead back but Harlee Dean’s header from the last corner of the game went harmlessly wide as the final whistle sounded.

The Good: Beautiful day, sun drenched St Andrews in good voice, entertaining second half, four good goals. The fact that we didn’t lose this match; we undoubtedly would have a year ago!

The Bad: The catering! Please BCFC sort it out! A lot of revenue is being lost because of slow inefficient service. Two or three people serving and the slowest beer pumps on the planet. USELESS!!!!!!

The Ugly: You kidding? Best summer since 1976 and football is back!

Referee: Peter Bankes; 7 I thought the officials had a good match. Nothing contentious in what was a thoroughly entertaining game (at least the second half was!)