Here is another article by almajir. He posted it originally on his own blog last night. He has given me permission to re-publish here.

It’s pleasing as a Blues fan to see Joe Hart credit us with his meteoric rise in fortune; from bench-warmer at Manchester City to England number one keeper in just over a year. Joe has been very quick to point out the good work that Dave Watson did with him last season, and how he thinks Ben Foster will be pushing him all the way for the England jersey now Foster is with us.

I personally think Dave Watson is one of the main reasons we have started to achieve as well as we have recently. I don’t think it’s any coincidence that his appointment coincided with an improvement in Maik Taylor’s keeping, and Joe Hart himself has said that Watson was instrumental with improving his technique and ability last year. Looking at our squad, we now have a plethora of keepers who can play in the Premiership, with Foster, Taylor and Doyle; we also have an excellent up and coming stopper in Jack Butland.

The problem with keepers is that you can only ever play one of them; and despite having one on the bench for every game it’s not often that a keeper will actually come into the team. I’m a believer that match practice counts for a lot, and so it would appear that with having three keepers who have senior experience I think we might be overstocked. I honestly can’t see (barring an injury crisis) Colin Doyle getting near the number one shirt; at his age he needs games and I don’t think he will be happy with being nowhere near the team.

Already this season, Colin Doyle was loaned out to Coventry only for us to almost immediately recall him due to a possibly injury to Ben Foster. I personally don’t think we can hold on to Doyle on the off-chance that we suffer a bad injury to two keepers, and I think now the time has come for us to be brave. Under the provision of the Football League statutes, we can loan out Doyle to a Football League club on an “emergency loan”. This loan must last between 28 and 93 days, and we can insert a recall option after the first 28 days (regs found here). I think we should do this, and allow Doyle to get some useful first team football on a regular basis.

Jack Butland would then step up to third keeper. It’s a big ask, but as third keeper he’s unlikely to get onto the bench barring an injury, and with a recall option in Doyle’s loan we’d have the added security after a month that if things really did go pear shaped, Blues would have experienced cover still.

I think it’s important Butland stays with us, to continue to learn from Watson (and Maik Taylor, who is actually older than his goalkeeping coach). If we have got an outstanding youth prospect on our hands, then really we have to make the most of the best coach we have to bring that prospect on; I’d go as far as putting Butland on the bench for cup games like the one we have coming up against MK Dons so he can get some match-day experience with the first team.

It’s been mooted on messageboards that McLeish is not just a squad manager; that he’s interested in building the infrastructure at the club, and improving things so that in times to come we’re still stable and we have things in place to encourage players to come and play for us. It’d be a brave move to loan out Doyle and push Butland on, but I think it’s an idea that has merit – especially with Taylor in the very twilight of his career. 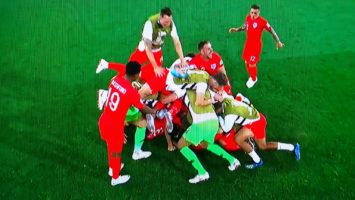