I don’t usually report on games I don’t attend as I don’t feel that I’ve taken in the full context of a match even if I’ve watched it on the television. Last evening of course we were playing Huddersfield, a team floundering in the relegation zone and there because they have been poor over the season so far. I always shudder when I see that we have such a side coming to St Andrews at the best of times as our capacity to take a pratfall knows no bounds when it comes to teams in the bottom three or four of whatever division we are in. Our inability to beat teams we should beat is the reason why we have never really been successful in the fifty-seven years I’ve been watching Blues and frankly it doesn’t look like it is going to change any time soon.

The schedule is a bit all over the place at the moment and for some reason I thought our kick off time was 7.45. Mrs Bazza asked what time I was going to be incommunicable and so she could make appropriate plans for our evening meal. It was 6.45 at this stage and I told her it was an hour to kick off but that I would check. I guess that just shows how wrong you can be and when I discovered that it was actually half time, I switched on Blues TV to discover that once again we were losing at home! It was a penalty by all accounts and the Terriers had converted it.

They were to be awarded another not long after the restart following a bright start from Blues. It looked pretty soft to me and the referee throughout was unimpressive but penalty it was which Lee Camp saved guessing the right way to dive. The ball got cleared and Crowley gave away a cheap free kick on the touchline 35 yards out from the by line. Set pieces like this are bread and butter for defenders but Blues seem incapable of doing basic things correctly at present just like the two from free kicks they conceded against Hull City. Surely these things are practiced on the training ground? Yes, it was an excellent delivery and yes Fraizer Campbell is a lively, proven striker at this level and he did well to get a toe to the ball but the defending was abject, not strong enough and poor reward and scant protection for the heroic efforts of Lee Camp a minute or so before.

We went on to concede another from further powder-puff defending when Pedersen was not strong enough in challenging for a header. Frankly, Huddersfield beat us easily and we have Lee Camp to than that a further three good opportunities weren’t converted. This could have been an embarrassment on the scale of the Bournemouth debacle!

Many of you reading this will not need me to describe just how abysmal the performance of our team was. I hate to sound negative but we have not won a league game in eight and it is only four wins in the last twenty so it’s difficult to put a positive spin on things. When we come out of lockdown, the first game was at the Hawthorns against a Baggies side, immeasurably better than either Hull City or Huddersfield Town. We came out of that game with a creditable 0-0 draw and we defended well and looked solid throughout which makes it difficult to understand why the two home games since have been so dire from the defensive standpoint. In fact an excellent chance for the usually reliable Scott Hogan close to the end, nearly won the match for us.

In searching for reasons, the empty stadiums can to a large extent be discounted since it is the same for both teams but it is noticeable that home sides appear, both here and abroad, to be having trouble, as the lack of atmosphere seems to favour the visitors. In our specific case, the manager, Pep Clotet has announced his intention to leave at the end of the season. I find the decision to have him stay on until then a little hard to fathom as he is now a lame duck manager who is going to find it hard to motivate a set of players who know he isn’t going to be around for much longer. I feel a caretaker situation would be preferable to what we have now. 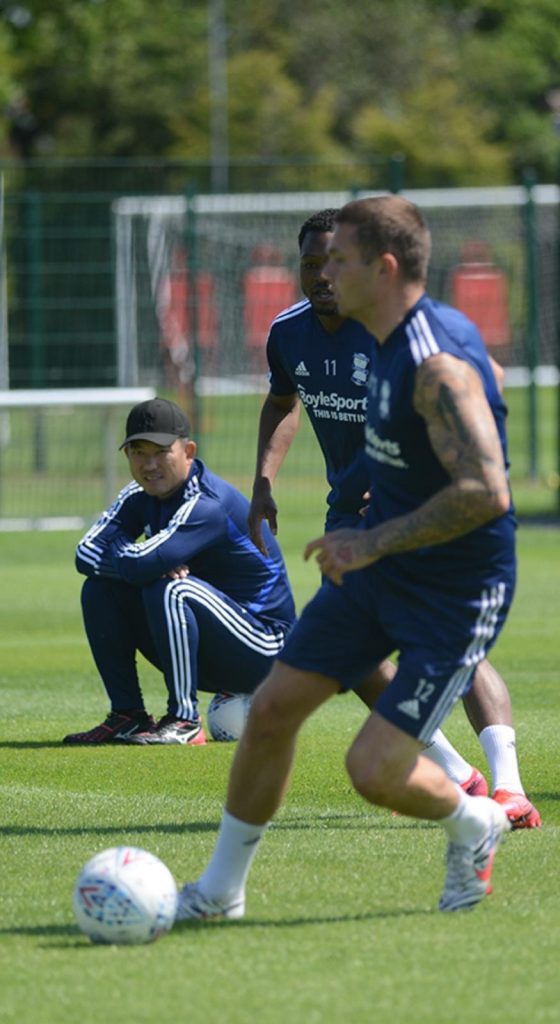 I was sent this picture by my mate, Ian via WhatsApp; it is of Ren Dong appearing to be taking part in training. Of course, we don’t know how much of a contribution, if any, he actually makes but it must be distracting for the manager, coaches and importantly the players to see this character, who as far as I know has no credentials to train professional footballers, poncing around in a Blues club tracksuit! He controversially moved his office to Wast Hills and has proved as popular as an outside toilet with a blockage. This does not inspire confidence for the future especially as there is the little matter of hiring a replacement for Clotet. What manager worth his salt is likely to accept the role with an unqualified, micro-management regime breathing down their neck in place? If there is interference, as many suspect, of this type going on, we have a major problem ahead of us. The word will soon get round and not only will we not be able to attract a top quality, experienced coach but good players will not be risking their futures either. After the Hull game, Matt Le Tissier who had the dubious privilege of watching us was asked how much work was required by any new manager coming in? His answer was both revealing and came as no surprise; a mammoth task. There is a huge amount of work to be done to turn what is a mediocre squad into one competitive enough to challenge at the upper end of the Championship. This presupposes that any additions over the next half a dozen transfer windows and any youngsters blooded into the first team improve us and there are no major set backs. I think we are in for a long wait!

Normally, I add a good, bad and ugly addendum to any reports I do. I suppose the good would be the fact that because of my error, I only had to watch 45 minutes of the dross dished up by our lot last night. The bad was evident for all to see; we never looked like scoring and our defence was like a colander. The ugly is the sinking feeling I get when we lose our best players at the end of the season and struggle to find suitable replacements. The owner and upper echelons of management at the club have not exactly covered themselves in glory over the last few seasons and I’m not pinning my hopes on seeing any marquee signings at management or player level in the near future. The result of all that, should it come to pass, is ugly!

Finally I usually rate the players and officials but I’m not going to as apart from Lee Camp who as I say stopped us taking a right pasting, the rest were about 3/10 and that is probably generous. Huddersfield weren’t great but they didn’t have to be to beat us. They had a game plan, stuck to it, worked hard and took their chances when they presented themselves. They were thoroughly deserved winners and if I’ve any criticism of them I would say it should have been at least six! The referee was mediocre and gave some questionable decisions. I didn’t think the penalty he gave against Gardner in the second half was correct.

This circus moves on to Craven Cottage on Saturday. We will probably play a lot better as we are up against a better side. Whatever happens, this season cannot end soon enough. Stay safe and healthy everyone. Let’s hope for an end to this nightmare and brighter times ahead eh?

View From the South – Crystal Palace vs Birmingham City