The last poll we ran on this site ran like this:

Where will Gary Rowett steer Blues to this season?

A good ‘turn out’ of voters, seemingly proved that the majority of you Bluenoses out there were optimistic yet realistic when Gary Rowett took over.  though my own thoughts on us reaching the playoffs turned out a step way too far.  Thirteen people, either scarred by Lee Clark’s tenure or else by a lifetime supporting Aston Villa thought we’d end up relegated, which was mercifully and totally wrong.  Interestingly, more people thought we’d end up snatching automatic promotion, to do this we’d have had to have translated nine defeats into nine wins!  Maybe next season, eh?

With the pity that Gary Rowett isn’t a ‘player-manager’, it’s time to vote for the ‘Joys and Sorrows Player of the Season 2014/15’.

So, who’ll get your vote?  Ahead of the Charlton home match, here are some selected stats from our squad, to help you to decide…

Darren Randolph, consistently number one choice for the number one jersey, forty four times, one red card isn’t a bad showing in a competitive Championship league.

Neal Eardley, two yellow cards and one red point to a player who really needed to show a little more professionalism, when he had his chance over six Blues appearances.

Jonathan Grounds, 2 goals, 7 yellow cards in 45 appearances.  A stalwart in the side this season, a lot of our ex-Oldham fullback.

Paul Robinson, Club Captain, and inspirational leader, 7 yellow cards and 1 red card, has he got one more season left in his legs?  36 games so far this season suggests it’s a possibility, but we’ll see!

Gavin Gunning didn’t manage more than one appearance before he was a victim to injury.  Definitely didn’t meet his undoubted potential this season.

Clayton Donaldson, Top Scorer (barring eight Cotterill goals in Charlton and Bolton games), all round workhorse with 16 goals this season; after all the fouls he’s drawn, only one yellow card is one heck of an achievement.  Thirty Nine out of forty shots were on target.  With forty six appearances this season, making him the joint-top choice this season, he has proven himself well worthy of the step up from League One with Brentford to the Championship.  Hopefully his goals can propel us to the Premiership next season!

Wes Thomas, Six goals which aren’t to be sniffed at for a striker who’s been largely sat on the bench, but three yellow cards and one red card point to a player who could perhaps be a risk to start, particularly when he’s featured in 35 games this campaign.

David Cotterill, 9 goals, an excellent return for a midfielder.  He topped the list with 8 assists and incredibly 42 out of his 45 shots were on target.  Perhaps he’ll be a striker next season 🙂  Eight yellow cards show a side to his game that could do with improving, with nobody in the squad with more yellows to his name.  Forty four appearances show his importance to the team this season.

Robert Tesche, 1 goal and one yellow card in his ten matches for the Blues since he arrived from Notts Forest on loan.

Rob Kiernan, 1 goal in a respectable 12 appearances since arriving on loan from Wigan.

Callum Reilly, 1 goal in 18 appearances this season.  He was unluckily injured when sent out to Burton Albion on loan, he’s not fulfilled last season’s potential and I’d imagine he’ll be nervously awaiting Rowett’s decision as to whether to retain his services next season.  A local lad, I really hope he gets the chance.

Mitch Hancox, 1 yellow card in his one and only appearance this season.

Nikola Zigic, Back for his season’s swansong, Donaldson’s form simply meant he wasn’t needed as often as he may have liked with only eleven appearances this season.  Only one yellow card means he’s lost a little of that niggly player he was, but perhaps that’s to his detriment with a goalless return.

Colin Doyle, Always ready to step in if Randolph were injured or suspended, or for our cup matches.  A loyal bench-warmer, with four appearances to his name this season.

Andrew Shinnie, Much maligned under Clark, this really has been his season at Blues, though only two goals in twenty eight games are symptomatic of the role he’s thrived in; rather than that of goal-poacher.  Three yellow cards maybe highlight some moments of frustration.

Jonathan Spector, Oft-injured, he seems to have found fitness and form at just the right time for us.  Three yellow cards in an improved (compared to last season) 24 appearances this season.

Koby Arthur, 1 yellow card, this season hasn’t proved to match last season’s potential, but the club have offered him a new contract so perhaps next season he’ll be more of a contender? Ten appearances in the league and cup show he was used sparingly this season.

Matt Green, this season has been a total wash out for him, with injury and the form of both Donaldson and Thomas (and even Novak) keeping him out of the team permanently.

David Davis, former Wolves man, slotted straight into Rowett’s team, 3 goals, 74 fouls (the most for a Blues player this season), 7 yellows and 0 red cards show his combative but fair style over the course of a huge 42 appearances.

Reece Brown, one solitary appearance that may be rectified in the last two games.

Paul Caddis, last season’s self-styled “Saviour” has seven goals, as our largely successful penalty taker and also takes second place on assists with six.  Six yellow cards.  Forty six appearances this season prove that Caddis, our stand-in captain, has proven himself as a necessary pick every match, making him the joint-top choice this season.

Demarai Gray, six goals, three of which were found in one match against Reading.  Twenty Nine out of Twenty Nine shots on target!  Two yellow cards in forty one appearances.  If he stays, he’ll surely be a key player in our squad next season.

Diego Fabbrini, in only three appearances so far, has provided a definite spark of talent to the team.  It would be great to see him here next season.  Our most talented player this season?  Perhaps, but maybe awarding a player with three appearances the player of the season award would be a step too far?

Lloyd Dyer, one yellow card in seventeen appearances since his arrival on loan from Watford.  Sometimes derided as ‘dire’ by fans, nevertheless, the man whose opinion matters has opted to start Dyer on occasions ahead of Demarai Gray and has put in some excellent performances.

I definitely know who my choice for Player of the Season would be, but I’ll leave that for you to decide.  One thing is for sure, it’s no exaggeration to suggest three or four could all be equally strong ‘contenders’, whilst ten or eleven can count themselves as unfortunate that their efforts can’t also merit more reward than a mid-table finish.  Keep Right On! 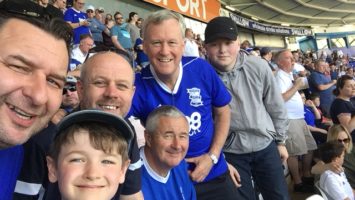 VIEW FROM THE SOUTH – SAINTS vs BLUES AND OTHER THINGS