I was nearly Billy No Mates for this game had it not been for the fact that Little Jack still wanted to go to the game despite his Grandad, Chris and his Uncle Will not being able to attend for various work and family related reasons. It seems they were the lucky ones! I drove up from my home in Blackwater, Surrey to Baginton to pick up Jack and from there down the A45 to the ground; a quick drink in the Royal George and into our seats. The kids for a quid had increased the meagre crowd to over 18,000 but it made little difference to the flat atmosphere about which Block 11 rather unhelpfully kept reminding everyone even though in fairness they have a point.

The side was unchanged from last week and there was some optimism that with the sterling comeback at Millwall from a seemingly hopeless position, the point gained against a good Leicester team and the excellent result at Leeds that Blues were finally turning the corner and could follow it up with a good win at home against bottom of the pile Ipswich. Unfortunately, it was back to the same old rubbish dished up against Huddersfield. A slow start, a complete inability to pass the ball five yards to a fellow team mate accurately and with total lack of movement, initiative was handed to the visitors whom I have to say are at the bottom of the league on merit. Ipswich are without doubt the poorest team I have seen at St Andrews with the exception of ourselves and they broke the deadlock with only eight minutes gone.

Nathan Redmond gave possession away cheaply with a square pass from the right 35 yards out and Lee Martin intercepted and drove towards the box. His subsequent effort fell to DJ Campbell, who was allowed to turn far too easily to shoot across Jack Butland from eight yards. It was a terrible goal to concede due to sloppy play and dreadful defending. I am sick and tired of reporting about gift goals that we seem to keep giving to the opposition. If you do that and then have to start chasing the game, however poor the opponents are, they have something to hold on to so with reasonable organisation aided and abetted by a total lack of threat, secondary to low tempo and no movement losing football matches becomes the norm. Birmingham, were hopeless in the opening 20 minutes although Wade Elliott brought a save out of Ipswich keeper Stephen Henderson with a fine 20 yard drive. Daryl Murphy tested Butland with a low effort that the young keeper easily saved before Marlon King forced Henderson to tip over his 25-yard free-kick at the other end. That was about it for the first half and Birmingham went off at the break to a chorus of boos.

Little Jack and I met up with Kevin and Mike from Joys and Sorrows. Kev was up from the West Country with his two sons, the youngest of who was attending his first game. You always remember your first match and it is a pity that the youngster will have this one fixed in his memory! Lee Clark turned to Chris Burke in place of the lacklustre Redmond in an attempt to provide some spark but it had little effect as in the first ten minutes of the restart the Scottish winger hardly touched the ball. It could have gotten worse for Blues as a Danny Higginbotham header only failed to double Ipswich’s lead because of a good save from Butland when Blues’ defence started dozing during an Ipswich short set-piece. Blues should have had a penalty when King was manhandled as he attempted to head a clipped ball into the box before Clark took off Leroy Lita and sent on Zigic, a change I would have made at half time rather than just after the hour.

This change certainly made a difference as Blues had Ipswich on the back foot for the rest of the game. However, Blues then squandered enough chances to win three games let alone one. Elliott blasted wide for the home side when well placed but the best chance of the game by far was wasted by Zigic who with a free header from King’s inch-perfect cross put it wide when in reality Henderson should have been picking the ball out of the far corner. This was a sitter and no mistake; he really should have scored. King’s beautiful touch for the big Serbian striker minutes later put him clean through one on one with the keeper but the big man’s shot was fired straight at Henderson instead of wide of him. This was another glorious chance wasted. Ravel Morrison’s deft chip found the roof of the net before Curtis Davies blasted wildly over in time added on as Blues continued to push for an equaliser in a game that they should have won with the quality of the chances created in the second half. It was not to be however and Ipswich held on to claim a smash and grab win.

On the way home there were the usual moans and groans from some fans calling for Lee Clark’s head, that the formation was wrong, the balance wasn’t right yadda yadda. I don’t subscribe to many of these views; football is a simple game. We lost because we only played half decent for the last 30 minutes. We lost because we didn’t keep the ball by passing accurately enough. We lost because our tempo was too slow and we made it too easy for Ipswich to get back behind the ball and defend. We lost because we gave a poor team a goal start and then failed to put them under pressure. Stop blaming the manager, Carson Yeung, the board, the stay away fans, the referee or any body else for that matter other than the players. They can and simply must play better than this especially at home; they have proved it before and can again but they have to play for more than one third of the game.

We can all be great managers after the fact and I don’t blame Lee Clark for sticking with the side that had done so well for him at Leeds last week but he has to react sooner if it’s not working. My major criticism of him is why oh why does he persevere with Hayden Mullins? He was once again atrocious and shouldn’t even be on the bench; surely Fahey, Gomis or Bouba Diop are better options? Mullins was simply not up to the task of counteracting N’Daw and Reo-Coker in the central midfield for Ipswich. Ravel Morrison on the other hand was excellent and at least tried to get the ball forward into central or wide positions and makes runs. Mullins passes it square or back, cannot beat a man, is powder puff in the tackle (at least he was yesterday) and gives the ball away when he does try anything; easily our worst signing for years.

Apart from the goal we were solid enough but we have no overlap down our right because Robinson is not going to offer you that. Wade Elliott had a decent game of all of those on show and Murphy tried hard but was uncharacteristically careless with his passing at times. Lita received no service to speak of and was therefore ineffective and King was a lot better when Zigic came on. The big man was excellent in everything except putting the two best chances of the game away. He should have buried both of them. Chris Burke needs the ball in space if he is to be effective and I think he is suffering from the lack of a quick marauding right back such a Stephen Carr or Paul Caddis to play off. The return of one of them cannot come soon enough. As we are at the moment, the side is not good enough and I’ve said it before and I’ll say it again; we have to get to May 2013 with our dignity intact and look to make an assault on the top of the table next season. Survival is the aim this year.

The Good: The performances of Ravel Morrison, Wade Elliott, Jack Butland and Nikola Zigic when he came on.

The Bad: Awful goal to concede, atrocious finishing by us.

The Ugly: The mood of the fans at the moment. I shall be glad when all the off field distractions are at an end so we can go back to being a happy club. There is far too much talk about Chinese businessmen, the HK Stock Exchange, BIH, the board and not enough about football.

Referee: Stuart Attwell 5: Performance was in keeping with the mediocrity of the game. Was not tough enough in clamping down on time wasting and when only four minutes of time added on were announced (it should have been at least six, N’Daw was down on the ground with an injury for two; I timed it!) Ipswich then proceeded to make two substitutions in the first minute of the four wasting another 90 seconds in the process! He added not one single second in lieu of this – disgraceful! The officials waved away a blatant penalty against King early in the second half.

I trust in Eck to sort our club out! 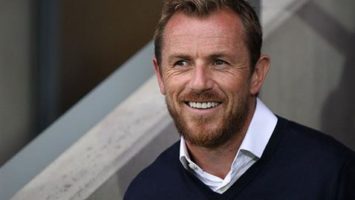 BCFC Give a Statement on Rowett’s Departure