It was an early start on Saturday morning to walk the dog and go and get my hair cut, something that I had been putting off for too long. It was then off to my local station to catch the train to Leamington Spa via Reading. I arrived at about ten past midday when Chris picked me up and we went back to the Oak at Baginton for a pint and to pick up Little Jack, Chris’ grandson. We had time to grab another in the Royal George before the game so everything so far had gone to plan and I love a plan when it comes together.

Middlesbrough presented a stiff challenge for Blues; fourth in the league and the side that had won more games away from home than any other, I have to confess here that I was concerned that our recent poor run might continue. It was good to see Murphy back in the side following his hip injury which meant that Ramage could revert to right back although I understand he was feeling a bit under the weather. Caldwell and Davies went back to being central defenders and a four man midfield of Burke, Fahey N’Daw and Townsend lined up behind King and Zigic.

Boro showed their intent as early as the third minute Matthew Bates fed Adam Hammill, a loanee from Wolves, on the halfway line and he dinked it forward for Lukas Jutkiewicz to carry to the edge of the box, check inside the last man, then drill in a 20-yard shot that was well-saved by Boaz Myhill. I thought it might be an awkward afternoon as Boro looked neat, tidy and bright in the early stages. Blues did show threat of their own however when they broke away after a mistake by Seb Hines who missed his tackle on Chris Burke. The Scottish winger got close to the byline but his cross towards Zigic was hooked away by Bates. Boro failed to heed this let off as Blues went ahead on 11 minutes. Burke again outran Kevin Thomson down the right wing and this time his cross towards the near post was perfect for Nikola Zigic who had to stoop to head in unchallenged from close-range. My prediction for the first goal on SKY Super Six missed by one minute but I wasn’t complaining. Zigic nearly doubled the lead five minutes later when his drive from outside the box was saved by Jason Steele at the second attempt. Boro looked to be falling apart when they escaped again when King was put through by Keith Fahey. The striker was just about to pull the trigger only to be thwarted by Tony McMahon’s excellent last ditch tackle. Blues were all over their opponents but nearly contrived to let the lead slip when a neat move started by Nicky Bailey sent Justin Hoyte racing down the wing to the byline. His cross into the middle found Jutkiewicz, unmarked eight yards out but the big striker couldn’t control the pass at an awkward height and skewed his effort wide. This was a very lucky let off for Blues in truth.

Hammill continued to cause problems and was unfortunate to see a 25-yard curling effort drift just wide of the far post. Zigic found himself in the wars when he stopped a full blooded free kick from McMahon full in the clock. It won’t have improved his looks but it certainly prevented Myhill having to get busy. The game was becoming end to end and it was Blues who next threatened when Andros Townend put King in for an opportunity. I felt that he took too long with the finish and this allowed Bates to get a foot in to block. Nikola Zigic was coming in for some muscular treatment from the Boro defenders and was clearly getting frustrated always ending up the villain in the referee’s eyes. His irritation boiled over just before the break with a late challenge on Bailey whose reaction was less than courteous. I felt the big man was lucky to get away without serious sanction and the half closed with cooler tempers and Blues on the attack. Burke’s final cross of the first period was drilled low and hard and Zigic and N’Daw were each very close to getting the vital touch. Fortunately for the visitors they didn’t and Blues went into the break with a slender lead.

Tony Mowbray had clearly been less than complimentary to his charges and they came out early to resume combat. They looked a lot brighter than their showing in the first half with the lively Hammill causing problems from wide. Blues then missed a great opportunity to double their advantage after 49 minutes as a corner was met by Steven Caldwell at the back post who laid it back for Zigic. The big man unfortunately stabbed the ball just wide of the near post from 15 yards.

Boro were coming into the game more and Bennett, Hammill and Jutkiewicz were looking increasingly dangerous in and around our box. On 56 minutes, Hammill’s trickery almost resulted in an equaliser for Boro. A lovely flick over the Blues back line found Bennett charging through to net from ten yards. The offside flag saved Blues’ blushes but it was much closer than it looked on replay later on! 1-1 at this stage and I reckon it could have been a very difficult last thirty-five minutes for Blues. As is so often the way with this game we all love, Birmingham snatched a second when Boro were having their best spell. Barely a minute after their disallowed goal, Hammill was robbed in midfield by Ibanez who sent Burke racing down the right. His square ball was weighted perfectly for Marlon King to finish from eight yard out with the Boro defence not tight enough to him. Three minutes later the game was up as Hammill once again hesitated thirty yards out from goal allowing Keith Fahey, the best player on the pitch all afternoon, to steal in and claim the loose ball and race away leaving the Boro midfield who had pushed up in his wake. Marlon King was to his right and kept Bates, the only defender able to influence proceedings, guessing. By the time he realised that he had to go to the ball it was too late and Fahey easily stepped inside him and slotted a lovely goal past Jason Steele’s left foot; a fitting strike to cap off a man of the match performance.

Middlesbrough did carry on going forward to their credit and threatened through Jutkiewicz who proved a handful all afternoon for Curtis Davies. Two headers from free kicks from Hammill and McMahon were wide of the target and as the minutes ticked by so did the Boro threat fade. Mowbray tried to freshen things up for the visitors with a triple change , as Richie Smallwood, Curtis Main and Malaury Martin came on for the disappointing Arca, Hoyte who I felt had run tirelessly for them with little reward and Hammill who was probably running on empty. It was a Blues substitute that almost added to the score when Huseklepp who played a lively little cameo almost broke through with some intricate work with Zigic around the edge of the box but Bates was alert and stretched out a foot to prevent the Norwegian striker receiving the final ball.

Middlesbrough were unlucky not to notch a consolation with five minutes left when Hines headed downwards from a partially cleared corner for Boaz Myhill to make a fantastic save that with the aid of the post stayed out. In the end it was a comfortable win aided and abetted by some slack defending by the Middlebrough defence it has to be said. It never ceases to fascinate that after a run of games when we gained only two points from fixtures against Nottingham Forest, Derby, Coventry and Leicester that we should beat Middlesbrough who are a far better team than any of those four! I think it has to be acknowledged that the ball ran for us on this occasion; something that has not happened for the last week or two but make no mistake Blues were the better side and deserved the three points. Fahey was excellent all afternoon and gave one of the best performances I have seen from him in a Blues shirt. Zigic was a menace to the visitors and they had no clue how to deal with him other than illegally; it is a pity that Mr Scott, the referee didn’t see it quite the same way. Murphy made a big difference to us defensively and I was so glad to see him back. Ramage did fine and is to be commended for playing whilst unwell. Curtis Davies stood up well to the threat of Jutkiewicz who is a big awkward unit and a real handful. Caldwell was solid as was Ibanez when he came on for Ramage. N’Daw was much better in this game than he has been of late and Townsend and Burke did what they do best; got out wide and delivered dangerous balls in. King and Zigic led the line well and deserved their goals. We did have one or two moments of good fortune however, such as Zigic’s goal which may have been marginally offside and Boro’s disallowed equaliser, the same. Despite the 3-0 score line Middlebrough look a good side and would be awkward opponents in a playoff semi-final.

We went for a couple of pints on the way back whilst waiting for my train and watched the second half of the rugby before making for Leamington Spa station for the return journey. My train was delayed 38 minutes which meant a late return home. Whilst standing on the chilly platform I got a call from Will who said, “Have you heard the news from the Bolton Spurs game?”

The Good: Good performance, excellent win, three points and back up to fourth.

The Bad: The terrible news about Fabrice Muamba; this puts the game of football firmly into perspective.

The Ugly: The possible implications for Fabrice lying in a coma in Intensive Care. Our thoughts and prayers are with you young man; may God bless you. Keep Right On.

Referee: Graham Scott (Oxford) 5: Overall he was OK but he failed to get a grip of the stuff going on around Zigic whom I thought was harshly treated. Just because Zigic is 6 feet 8 inches tall does not mean that he is necessarily the aggressor in the box. He can be fouled and the Boro defenders took more liberties than is their due where the big Serbian was concerned. The official then didn’t book Zigic for the late challenge on Bailey and yet booked N’Daw for something that was a free kick and get on with the game. 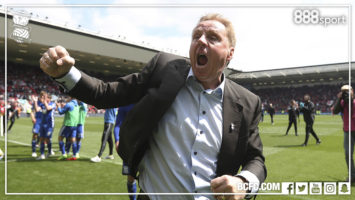 The Trillion Dollar Question – Should Redknapp have been given more time?

5 Comments on View from the South – Birmingham City vs Middlesbrough