Here is Baz’s take on Saturday. I agree it was a bad game – but I have some opinions on it which I’ll add at the end of Baz’s report. It was great meeting him, all be it briefly!

Once again, Will was unable to join us on this trip as his wife still hadn’t produced his second child to order to coincide with the football. My son Jonny and I therefore got in the car and made our way north to the Oak at Baginton to meet up with Chris. I was halfway down my first pint when Chris came out with a bit of a revelation about his little brother; apparently he was expected the following day in Baginton to watch the air show taking place at Coventry Airport right next to the pub! Hang on says I; what the deal here then? Can’t come to the football because of the impending birth of a baby whose conception was badly timed to mess up the season but can still be 130 miles from home to watch a Vulcan Bomber land?

It was enough to put a bloke off his beer or not as in my case but it still required the ordering of another before I could take in the full enormity of this new information. Who rings up at this moment but Will who now has the temerity to ask if I can pick up an order at the Blues’ shop for him. “What’s all this then” I say. Chris is rubbing his hands in glee at Will’s discomfiture but we all listen intently to the excuses which run along the lines of it is closer to get back in the event of anything happening from Baginton than from St Andrews and it’s simpler, with less traffic to contend with and he can leave before it all ends ananananananan…………… yeah right! Much stick was promised and is now being delivered. Just remember readers you heard it on Joys and Sorrows!

Piss taking now over, Chris Jonny and I moved off in the direction of the hallowed ground with young Jack, Chris’ grandson who was attending his fifth match. Now Jack is developing notoriety in that he is yet to see the Blues score in any of the games he’s attended. We arrived at about 14.30 and went straight to the Blues shop to pick up Will’s order. Bought some new shirts which are in stock at long last and by the time we had got to the front of the queue, paid for our purchases and got Will’s parcel there was barely enough time to get in the ground so the pie and a pint would have to wait until half time. We got in just in time to see Hleb narrowly miss the far post with a cross shot in the second minute.

Little did I realise at that stage that this was to represent probably our best chance of the game. The first half was a bit of a non event with pretty dull fare to be honest. Roger Johnson was unlucky not to score with an excellent glancing header from a good delivery from Seb Larsson which took the paint off the far post with the keeper stranded and Jerome almost scored on the stroke of half-time with a toe poke when the keeper fumbled another Larsson free kick. The keeper was very lucky that the ball stuck between his legs to keep the score 0-0. Wigan produced little threat apart from a fierce shot from Rodallega that Foster fielded for a corner and N’Zogbia looked dangerous down the left and was of course the pantomime villain. It had to get better in the second period didn’t it?

Having grabbed a pie in the interval I am delighted to say that I got to meet up with Kevin Ball who had come up from Devon for the match. I speak with Kev quite a bit on the phone, text and by email but up until this point we had never met. I hope next time it will be over a pint but after a brief conversation we resumed our respective seats.

The second half didn’t improve one jot. I am finding it difficult to understand why McLeish insists on including Bowyer in the line up when he is out of form and he knows that he cannot do the box to box thing any more. He was meant to be stationed out in the left wide berth but of course he kept coming inside and leaving the team unbalanced and exposed with Ridgewell providing our only outlet on that side. Hleb did to his credit spot this and attempted to fill in by linking up with our double-agent. I can understand that McLeish wants to play 4-5-1 but against Wigan? A refrain of a year ago came in with the chant 4-4-2, 4-4-2, 4-4-2………….. from the Tilton after about an hour of the game which was sterile and that is being kind. Eventually, Bowyer was replaced by Zigic and Beausejour for Hleb but it didn’t change the pattern of the game that much. Belatedly, Kevin Phillips came on for the spent Jerome with 12 minutes left.
I don’t believe that either side would have scored if they were playing now and the match drifted away to a dull conclusion but not until Gardner was dismissed from the field for a dreadful tackle on Di Santo with only a minute left. Many of those ringing in on BRMB afterwards were saying that the sending off was a disgrace and that Gardner had won the ball etc but they are wrong. The tackle was violent, reckless and dangerous and in accordance with Law 12 it was sanctioned appropriately and Mr Clattenburg was correct despite all partisan protest.

This was a truly dreadful match and one of the worst I have witnessed for a long while. Blues were disjointed, unbalanced, pedestrian and one dimensional against limited opponents equally devoid of ideas. I said last season that Wigan were the poorest team I had seen down at St Andrews and I’m afraid this dubious accolade has just been extended unless something worse shows up in the mean time. They contributed in large measure to the low quality of this game but most of the blame has to be heaped on Blues who, as the home side, the onus for enterprise resides. Blues ended the game with ten men and rightly so but Rodallega can count himself very lucky to have remained on the pitch in the first half after a clash with Johnson when the striker led with his elbow and then aimed a head butt at the defender’s chin when he naturally objected. Both players were booked but I believe Mr Clattenburg got this wrong; the talented but hot-headed Rodallega should have walked.

Wigan came for a point and they got it. It wasn’t pretty but they deserved their draw as Blues simply lacked the guile, energy and tempo to break them down. However, Blues did have chances to win this match and I am afraid that Jerome’s tenure as our main striker may well be approaching its end. Many think he isn’t good enough and sadly that conclusion is probably valid despite his improvement over his time at Blues. He simply doesn’t score enough and his positioning and touch are unlikely to get much better. I say this with a heavy heart as I have always been a Cameron Jerome fan hoping and believing that he would eventually come good. This season represents his final chance and the clock is ticking.

I feel sorry for Kev coming all the way from Devon to take in a rare game to watch this dross. As for Will he should tell his missus to stop messing and make him a proud father again so he can concentrate on the important matter of following the lads. He did very well to miss this rubbish though didn’t he? 😛

Finally spare a thought for little Jack who has still not seen Blues score a goal! I told Chris not to bring him again! (only joking Jack :-D)

I posted on the forum this morning that I felt Jerome got undeserved stick. I thought he was one player that worked really hard. He was on his own most of the time and with two defenders on him most of the time. He had several chances of which I would say only one he really fluffed – the others were either saved or put off by defending.

Wigan came for the point with the hope to nick something on the break. The criticism I have, (although not in a major strong way), is we still haven’t worked out how to unlock defences. Although that can obviously happen with the forwards, in truth it is usually the midfielders who are tasked with that responsibility.

The only thing I would say on Jerome is he needs to work on his first touch – however that could be helped if he had someone supporting him.

On the sending off. At the time I was furious, but after seeing MOTD I have to say that the ref got it right. However we should have had a penalty! 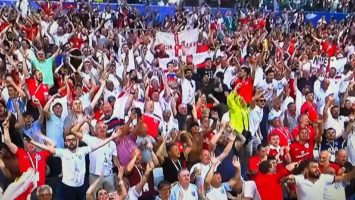 Sammy Yu is a Bwunose