The build up to this match started on Saturday afternoon. As I switched on to listen to another two hours of Jeff Stelling, the news came in that Wolves had gone one down against Plymouth. Well that was unexpected and welcome but surely it was a matter of time before our free scoring neighbours would rectify matters. Paul Merson was covering the game and as events unfolded he stated that Wolves would need 20 new players if they did get promoted then added as a sideswipe AND Birmingham! Whilst uttering a stream of expletives that questioned his parentage and personal persuasions, I had to admit that he is absolutely right. Southampton took the lead against Cardiff and I thought that it was all too good to be true especially as Reading were still 0 – 0 against Bristol City. After an hour’s play things got even better with Reading going behind 1 – 0 added to which Burnley were getting a right tonking from Sheffield Wednesday. Preston were the only play-off hopefuls who actually won and the positions incredibly didn’t change. What an opportunity for us!

Onto our game on Sunday – I watched the match on telly I have to confess as I couldn’t see the point of driving over two hundred miles to Bramall Lane in those circumstances. I felt it was going to be a tight contest but I fancied us to get something. Our back four was revised again with Franck Quedrue coming in for Liam Ridgewell who got injured in training the day before. Carsley was fit and as expected he played with Fahey in the centre of midfield. Sinclair and Bouazza on the wings and we had a decent balance about us although I would have favoured Damien Johnson rather than Fahey in what was likely to be a hard attritional contest. Costly and Bent were up front keeping the pairing that had looked lively in the week against Crystal Palace.

We started well and Bent was unlucky to see his header come back off the bar in the early minutes. Sinclair really should have done better with an attempted chip to score at the far post when Paddy Kenny came rushing out and didn’t get there. We were lucky to survive their best chance of the half when Carr standing on the post prevented a certain goal but could only clip the ball out to Henderson standing in the middle of the goal on the edge of the six yard box. Fortunately, he placed his firm header straight into Taylor’s grateful arms. On balance Blues were the better side in the first half which makes the opening goal all the harder to bear just prior to half time. A cross from the left, found two Sheffield United forwards in offside positions. One of those was Henderson whose deft header found Danny Webber free six yards out. The pundits argued that Taylor should have been more committed to block and there should have been more pressure on the ball and Jaidi should have tracked his runner but Henderson was clearly offside and therefore none of this should arise. A very poor decision and we’re 1 – 0 down!

Second half Jerome came on for Costly and I felt we became less effective. Sure make the change but I thought he and Bent were causing Morgan and his fellow defenders problems. For some reason we stopped feeding Sinclair and Bouaazza and Sheffield took control of the game. We played very much into their hands by going more direct which is meat and drink to what is a hard working but largely one-dimensional side. Sinclair was substituted with McSheffrey (glad to see him back at last) and having largely given up all hope of us getting back in the game McSheffrey was instrumental in providing the best move of the game that resulted in a first time ball in from the left behind their defence in the corridor of uncertainty. Morgan was forced to play it with Jerome about to tap in but could only divert the ball past his hapless keeper. We had begun to come back into the match just before this and I felt we deserved to be level. The match seemed to become a midfield stalemate with both sides huffing and puffing when eight minutes from time Lee Mason, the referee made the worst penalty call I have seen all season. A cross into our box challenged for by Jaidi, Carr and a Sheffield forward was whistled for a push. I have watched the reply at least a dozen times and cannot see any justification for the award. Cotterill stepped up and coolly slotted the goal.

I am not one to complain about officials generally because they have a difficult job and when they make mistakes they usually don’t influence the game and even the poor officials are as bad for both sides. This afternoon was different however; the first goal was offside in the build up – fact! The penalty award was soft at best and downright wrong at worst. Sheffield didn’t merit having us beat them but they didn’t merit the win either. Blues were robbed here and no mistake.

Games are running out and this result will not decide whether we are promoted or not but our continued failure to get points against very ordinary, journeyman type sides such as Sheffield United will mean another year and probably several after that in the Championship I’m afraid. I hope and pray that we get Phillips, O’Connor and McFadden back into the fray soon before it’s too late. 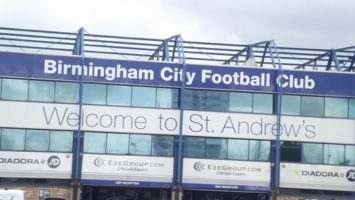 Three Standout Away Performances For Blues